In line with its expansion plans, ENOC’s Tasjeel, the UAE’s first and largest testing and registration centre, opened a vehicle testing centre in Kalba, bringing the total number of testing centres in Sharjah to ten. The newest facility also marks Tasjeel’s 100th operational testing bay across Dubai and the Northern Emirates.

Equipped with a dedicated customer service office and a car inspection lane to serve approximately 50 vehicles daily, the centre adds to the convenience of motorists in Kalba, Sharjah, and the Northern Emirates.

Commenting on the launch, Major General Saif Al Ziri Al Shamsi, Commander-in-Chief of Sharjah Police said: “The opening of the inspection centres in the Eastern Region is part of a strategy to provide advanced vehicle inspection services in the Emirate and enhance customer satisfaction. Customers can avail all vehicle and driver licensing services besides insurance services at the centre. The centre’s services would be especially useful as the eastern region becomes a tourist destination.”

His Excellency Saif Humaid Al Falasi, Group CEO, ENOC, said: “In line with our commitment to better serve our customers across Dubai and the Northern Emirates, we have unlocked a new milestone for Tasjeel with the opening of our 100th testing bay in Kalba. Currently, we have 10 Tasjeel centres in Sharjah, making car testing and registration more convenient for customers in the area. In addition to providing seamless services to our customers, we continue to ensure people are safe on the roads through Tasjeel’s diverse offerings.”

For his part, Ahmed Al Mazmi, Director Finance Services and a member of the Supervising Committee for the implementation of the two contracts for technical inspection of vehicles, and the representative of the Sharjah Asset Management Company, said:
“Based on our vision to provide the best quality service to customers in the Emirate of Sharjah and the Northern Emirates, under one roof, we will jointly cooperate on examining light and heavy vehicles. In addition, the committee will oversee the effective provision of services for residents and visitors of the Emirate of Sharjah, ensuring they can access the latest vehicle inspection and registration services and a comprehensive range of facilities which adhere to the highest international standards.”

Last year, Tasjeel opened a facility at the Al Rahmania Mall, the first of its kind in a mall in Sharjah. Currently, Tasjeel owns and operates 28 sites in Dubai, Sharjah, Ras Al Khaimah, Khorfakkan, Al Dhaid, Hatta and Kalba – all of which use state-of-the-art equipment – as well as three mobile units. All Tasjeel centres are equipped with the latest testing and inspection machinery and qualified staff. As of 2021, Tasjeel has tested over 1.4 million vehicles per year across its testing bays in the country. 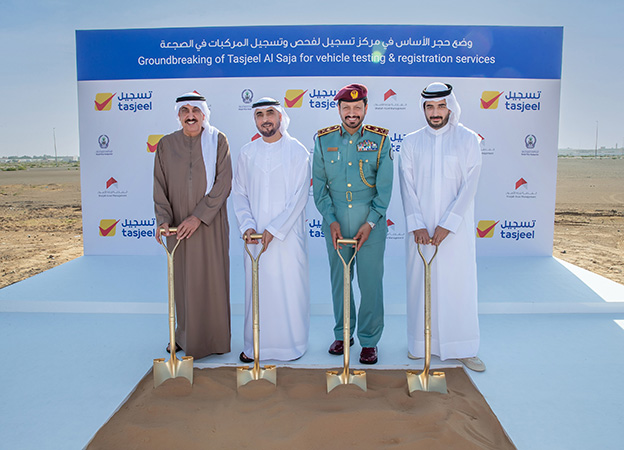